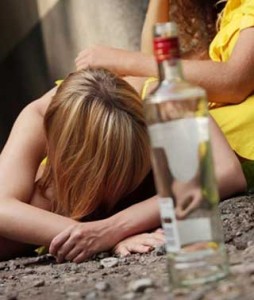 Never mix alcohol with other drugs. Alcohol can block the beneficial effects of certain medicines. When used with other depressants (including many prescription and over-the-counter medicines), alcohol compounds the sedating effects. In extreme cases, that can cause unconsciousness or even death, and certainly mental issues can follow.

No wonder alcoholic beverage companies’ ads feature humor, fun, and good times. Different studies estimate that underage drinkers consume anywhere from 11 to 20 percent of the alcohol in the United States. In a multi-billion dollar industry, that adds up to a lot of money in sales. But the clever ads are misleading.

“The idea that you have to drink in order to have fun is alarming and disturbing and incorrect,” warns Penny Wells, president and executive director of SADD. Young people often incorrectly overestimate how many of their peers drink. In the 2002 Monitoring the Future Study, for example, 65 percent of tenth graders reported no alcohol use within the month before the survey.

Indeed, teens who drink often can’t remember their “fun” afterwards. “They have absolutely no idea what they’ve been doing,” says Molly Linn. “Quite honestly, if people could see what they’ve been doing, they wouldn’t consider that fun.” Suzanne Iskander adds, “I’ve been around people who are intoxicated, and they’re completely incoherent.”

Help get the truth out. Work with classmates to develop your own clever ad that accurately shows the consequences alcohol can have for teens. See if you can get your ad videotaped and played on a local cable channel.

To Hell and Back

Chris started drinking in high school to have fun with friends. Later, he drank to celebrate any successes in school, or to get over any failures. When he went to college in southwestern Ohio, Chris drank even more.

“After a time, you just drink because the sun comes up,” says Chris. “You don’t really know how to function without it. Then you drink just to feel normal.”

Chris withdrew from his family. He became nasty and rude. He lied about his grades. He hid his drinking and debts.

“It led to a lot of guilt and shame,” says Chris. Still he drank. “You use alcohol to cover up all the feelings, and when they start to creep back into your consciousness, you just wash the guilt and shame away again.”

Friendships suffered. “You withdraw from other relationships so that alcohol is available,” says Chris. Chris drank with his fraternity. But the alcohol–not people–was the priority.

As problems spiraled out of control, Chris became anxious and depressed. “I resigned myself to the fact that I was going to have to live that way for the rest of my life and that there was really no way out,” Chris says. “Blotting out consciousness until the bitter end seemed to be the only option.”

When Chris drove back from the fraternity house one night, a police officer cited him for driving while intoxicated. When his parents found out, they drove five hours to the college. They confronted Chris about his drinking and persuaded him to get help.

During treatment, Chris finally admitted that he couldn’t handle his alcohol dependence alone. “I saw all these people, and they talked to me, and they were exactly like me,” says Chris. “That’s when I saw that this was a progressive disease.”

Chris has been sober for a year. He attends Alcoholics Anonymous meetings regularly. He’s mending relationships with family and friends. And he’s back in college.

“I could wax poetic for an hour about how much better life is,” Chris says. “I feel that as long as I stay away from that first drink, there’s a lot that I’m capable of. I do what I’m supposed to, and life’s all different.”

Do you think a friend may have an alcohol problem? Talk to him or her about going to parents or another responsible adult. They can then intervene and try to get the friend some help. “Certainly you’ll have misgivings,” says Chris, “but if you realize in your heart you’re doing it for the right reasons and your convictions are right, you just may save that person’s life.”